Merry Meet friends.  I want to start by thanking all of you who come to read my blog, subscribe, comment.  I have had a big jump in subscriptions and comments and up to 4500 hits!  I am humbled and happy that my blog seems to be liked 🙂  Thank you much.  This past Monday my family received wonderful news!  My daughter Kate is 20 weeks pregnant with baby # 2 ( if you read my blog or know me thru facebook you know Lily..my darling granddaughter who is 2)!!  Because she is 20 weeks, she was able to finally have her ultrasound and we were given the wonderful news that a  lovely boy is coming to us all!!  His name will be Charlie Matthew and he will be here towards the end of May.  We are all very happy and excited and Lily is already talking about baby Charlie and mommy and daddy are preparing the room and the whole family is shopping! LOL  The wheel of Life continues to turn and new joys come often don’t they!

I thought that as I have talked about Imbolc and Brighid is honored at this Sabbat, I would talk a bit about her.  Brighid happens to be a favorite Goddess that I will call on often as I am very Irish and the Celtic pantheon is important to me.  In Irish mythological cycles, Brighid (or Brighit), whose name is derived from the Celtic brig or “exalted one”.  She appears as Brighid to the Irish, Brigantia in England, Bride in Scotland and Briganu in Brittany.  She is the daughter of the Dagda, and therefore one of the Tuatha de Dannan. Her two sisters were also called Brighid, and were associated with healing and crafts. The three Brighids were typically treated as three aspects of a single deity, making her a classic Celtic triple goddess.  Brighid as maiden, mother and crone.  For Imbolc Brighid is a maiden, as it is the coming of Spring.  It is said that Brighid was born at the exact moment of daybreak;  rose into the sky with the sun, rays of fire beaming from her head. It is also said that wherever she walked, small flowers and shamrocks would appear. As a sun goddess her gifts are light (knowledge), inspiration, and the vital and healing energy of the sun.

Brighid was the patron of poets and bards, as well as healers and magicians. She also represents herbalism, childbirth and midwifery, hearth fire, and smithcraft.   She was a Goddess of Fire and a Warrior.  She was especially honored when it came to matters of prophecy and divination. She was honored with a sacred flame maintained by a 19  priestesses, and her sanctuary at Kildare, Ireland, later became the home of the Christian variant of Brighid, St. Brigid of Kildare. Kildare is also the location of one of several sacred wells  in the Celtic regions.  There are wells all over Ireland sacred to Brighid.  Water is associated with healing and wisdom.

Some facts and correspondences:

In many Pagan traditions today, Brighid is celebrated with crafts that honor her role as the protector of the hearth. You can make a Brighid corn doll;  as well as a Bride’s Bed for her to sleep in. Perhaps the best known decoration is the Brighid’s Cross whose arms represent the place where a crossroads comes together, the space between light and dark.  You can find multiple sites on how to make the Brighid’s Cross..even you tube video’s so I won’t go into that here.  To make a Bride’s Bed:

* You’ll need a small box, or basket.   Line it with a towel or small blanket.  Add or make a small pillow and place in the basket as well. Then top with another warm blanket, just like your own bed. Place the bed by your hearth fire.  If you’ve made a Brighid doll,  place her in the bed before you go to sleep at night. If you don’t have a Brighid doll and don’t wish to make one, you can use a broom or besom to represent Brighid instead.  The broom is an old symbol of female power and the fertility that Brighid represents.  If you want to bring fertility and abundance into your home this year, make sure Brighid doesn’t get lonely in her bed. Place a Priapic wand (acorn wand)  in there with her to represent the god of your tradition. Remember — fertility doesn’t just mean sexuality. It also applies for financial gain and other abundance.  Once Brighid is in her bed, you can gather around the hearth fire with your family, and welcome your guest with the traditional greeting, spoken three times:

Leave candles burning beside Brighid throughout the night – place them in a dish of sand or dirt for safety considerations. If you need inspiration in a matter, or wish to work some divinatory magic, stay up throughout the night and meditate, asking Brighid for guidance.  I put my candles in my cauldron or right in my fireplace after the hearth fire dies down.

One of my favorite tales about the goddess Brighid  involves two lepers who appeared at her sacred well at Kildare and asked to be healed. She told them that they were to bathe each other until the skin healed. After the first one was healed, he felt only revulsion for the other and would not touch him to bathe him. Angered, Brigid caused his leprosy to return. Then she gently placed her mantle (cloak) around the other leper who was immediately healed.  This also goes along with her mantle or cloak of green…as she comes in the Springtime, her cloak awakens the Earth and it greens and the flowers start to bloom.  How wonderful! 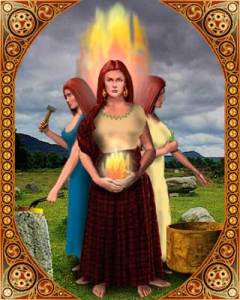 To have Brighid represented at your altar for Imbolc,  you can of course have a statue of her, print a picture off the internet,  a book of poetry or your own poem you’ve written,  healing herbs, silver coins,  and lots of candles.  A cauldron of water could represent her sacred wells. If you aren’t familiar with Brighid I hope this post gives you reason to learn about her and to place her high on your list of favorite goddesses.  She will not disappoint you!

*Some of this information comes from About.com and Goddess Gift and my own BOS.