Merry Meet lovely friends!  I am sitting in my easy chair with a warm glowing fire going, my daughter in the chair next to me, chili in the slow cooker, hot tea (cinnamon) in my cup and decided to write a blog post.  It has been snowy again today..we have about two inches of snow so far with more expected as the week goes on.  Winter is here no doubt!  Temps in the mid 20’s during the day, windy, brisk..and I just love it!

Earlier this week I pulled out three books I have on Yule..one is Dorothy Morrison’s book “Yule..a celebration of light and warmth.” and “The Winter Solstice.the sacred traditions” by John Matthews, and “Pagan Christmas”  by Christian Ratsch and Claudia Muller-Ebeling….all three are great books and contain a huge amount of information, history, recipes, crafts & rituals for the Yuletide season.  A common theme all 3 books is the symbolism behind our much loved “stuff” we put all over the place at this time of year.  Thought I would discuss a few of them!

Bells– Pagans, at their festivals, would originally ring bells to drive away the “demons” that surfaced during the cold, dark time of the year.  Christians are taught in the bible “to make a joyful noise”.  Bell ringing seemed to fit the bill.  Have you ever heard a bell ringing choir during a christmas eve service or mass?  Very beautiful.  Bells are very much associated with the season.

Candles-As a witch, the symbolism of a candle is about representing the element of fire, and representing God and Goddess and sends healing and protection when needed.  Candles are thought to have originated in ancient Rome when they gifted them to each other during Saturnalia.  The flame was thought to chase away dark winter demons and urge the Sun back into the sky.  At this time of year especially, my home is alight with candles to add warmth and light to my home. 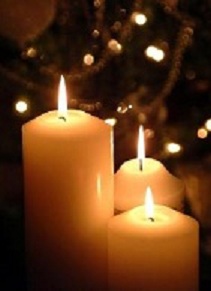 Evergreens– Evergreens were used to decorate homes and halls dating back to the earliest Winter festivals.  Because the green never fades, they were thought to have power over death and destruction.  That power was again thought to chase away the winter demons and urge the Sun to come back. Evergreens in winter gave the pagans hope for a return of the light and the renewing power of the goddess nature.  I love to bring in the greens for their wonderful scent also!

Holly–  Holly has vibrant green leaves and bright red berries during the winter’s cold, providing a beautiful symbol of rebirth. The Celts gathered holly branches and placed them in their homes the night before the winter solstice as protection against sorcery, lightning, and death.  In Scandenavia, it was believed that holly would bring luck to the house.  In Roman Bacchus, holly was the female counterpart to male ivy and this is why wreaths were made of both and hung on the front door.  Pagans believe Holly is Masculine to Ivy’s feminine.  With this multilayerd symbolism, the holly is indeed the crown jewel of evergreens.  This is why the Green Man wears a crown of holly.  I have beautiful holly bushes in my own yard and can cut fresh stems thruout the season.

Mistletoe– Sacred to the Druids, the berried mistletoe symbolized the semen of the gods, and was used to bring about great fertility and abundance.  Brought into the home and hung over doorways, it also protected from evil.    Why do we kiss under the mistletoe?  Norse legend  says that Frigg, loved her son Balder so much that she couldn’t stand the thought of something happening to him.  but Loki (the God of Mayhem) fashioned an arrow out of mistletoe and gave it to Balder’s blind brother.  The arrow was shot and Balder fell dead.  Frigg’s tears restored Her son to life, and in her happiness, she declared the mistletoe plant a symbol of luck, love and promise.  Kissing under the mistletoe means you are receiving Frigg’s blessing.  I think it’s also very romantic and fun!

Reindeer– Pagans believe the reindeer symbolizes the horned God Cernunnos.  Others believe they represent the stags that drew the Norse goddess Freya’s chariot..either way, reindeer have pagan origins.  And how would Santa get all over the world without them??? 🙂

Wreath–  A circle of greens…to a pagan a perfect symbol of  the never-ending cycle of birth, death, and re-birth.  Often used to represent the Sun as well.  The Romans gave wreaths during Saturnalia as a gift to symbolize goodwill, friendship, and joyfulness.  To me, nothing says Yule/Christmas more then a wreath on the front door.  And now many people keep a wreath on their door all year long..decorated for the various holidays or seasons.

Yule Log– The Celts adorned a log (symbolizing the Oak King) with evergreens (symbolizing the Holly King) to signify the  death of darkness and the warmth of the sun during the newborn  solar year.  According to tradition, the log should be burned continuously for 12 days, and a bit saved  to light the yule log for next year’s fire.  I burn my Yule log on Winter Solstice night.  I decorate it with greens from my own yard.  I also make a tabletop version…holes have been cut to support tapered candles in red, green and gold.  Covered in greens, pinecones and a big red bow!

In her book “Yule”, Dorothy Morrison has a beautiful chant to say while burning your Yule log…

Old King we thank you for all you’ve done

For lessons learned and victories won

We must however, bid you adieu

For your reign is finished, it’s over and through

Be born with ease; grow strong and bright

Gain strength and stature in the sky

Shed your warmth on us, now from on high!

Now, while decorating  for the holidays, you will know the meaning behind the items you place so lovingly around your home.  You are bringing magick into your home, celebrating rituals that have been practiced since ancient times.  Warm bright candlelight, the smell of pine and fir, the family gathered for wassail while the Yule log burns.  Whether you celebrate Yule, Christmas, Hannukah…the feeling this time of year is universal.  It is approached with great love and  joy.   Take the time to celebrate the Solstice…you will make a new tradition in your own family that will be passed on to your children and grandchildren.  Blessings to you and yours, Autumn